VISIR is a numerical model for computing optimal maritime tracks. Its development started from scratch at CMCC in 2012. VISIR is based on a graph-search method and uses dynamic meteo-oceanographic fields for computing optimal maritime tracks. Furthermore, VISIR considers both static constraints, such as avoidance of shallow waters, as well as time-dependent constraints related to vessel intact stability. So far, ocean currents and surface gravity waves were considered in VISIR for motor vessels.

In a recent development, VISIR optimal tracks are assessed for their capacity to reduce carbon intensity of the voyages. VISIR model powers an operational routing service for the Mediterranean Sea (www.visir-nav.com) and was used for mapping optimal tracks in the Atlantic Ocean (www.atlantos-visir.com). VISIR is validated versus both analytical solutions, another path planning model, and actually sailed tracks reported through AIS data.

VISIR is coded in Matlab®. 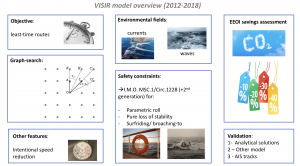 Output
VISIR computes two types of tracks: geodetic and optimal. The geodetic track is the straightest path between departure and arrival location given the coast topology and the bathymetry. The optimal track is the shortest path taking also into account the time-dependent sea-state and sea circulation and a few vessel stability constraints.

In fugure below, geodetic (blue) and optimal tracks (red) for the Norfolk-Algeciras route accounting for both surface gravity waves and currents. Ocean current magnitude is displayed as shading and its direction as white arrows. Vertical panel stripes refer to daily timesteps of the optimal tracks –  the interface between stripes is marked by a green dashed line. Departure date: 2018-06-21..